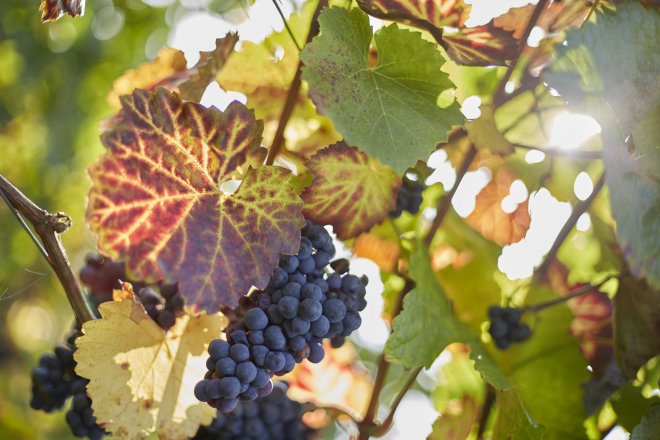 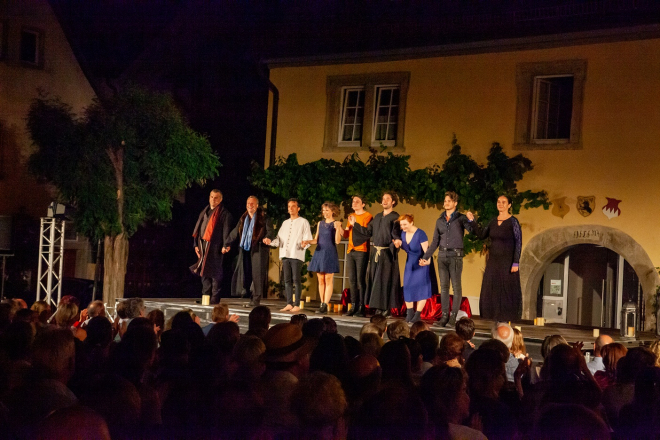 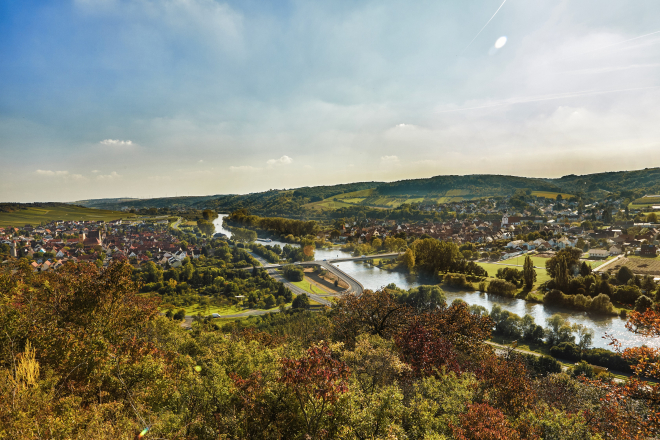 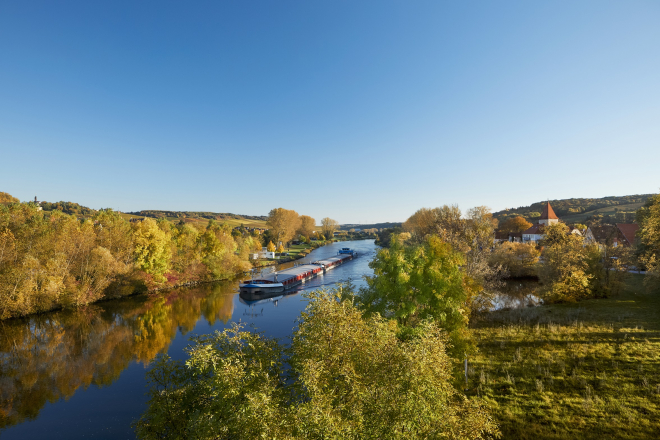 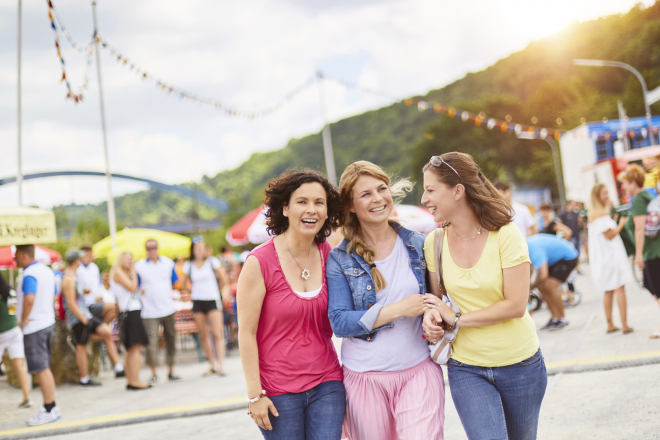 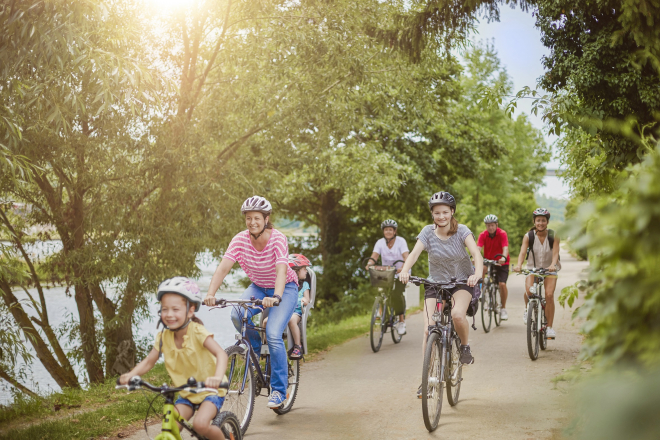 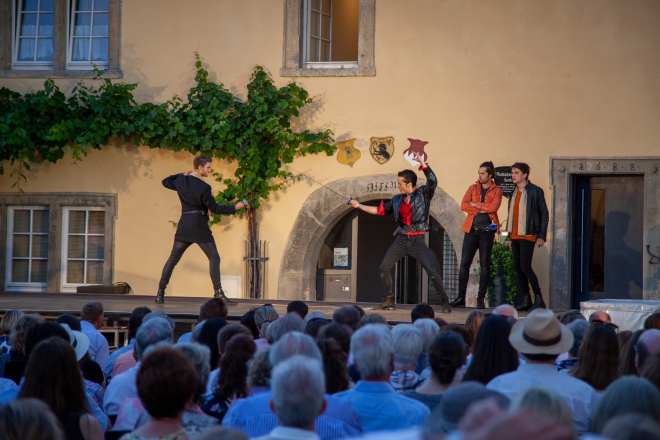 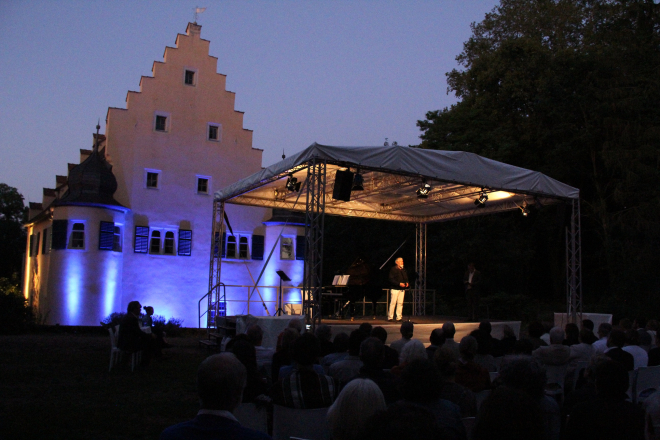 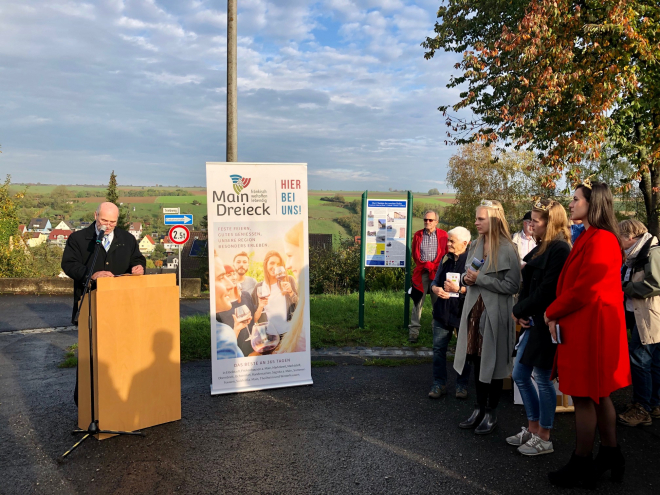 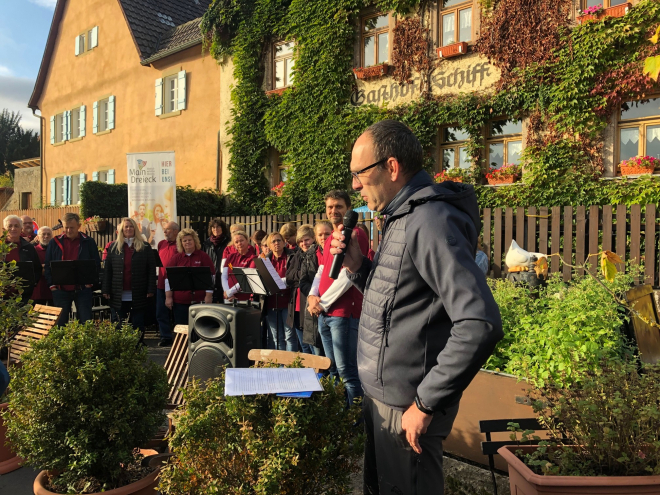 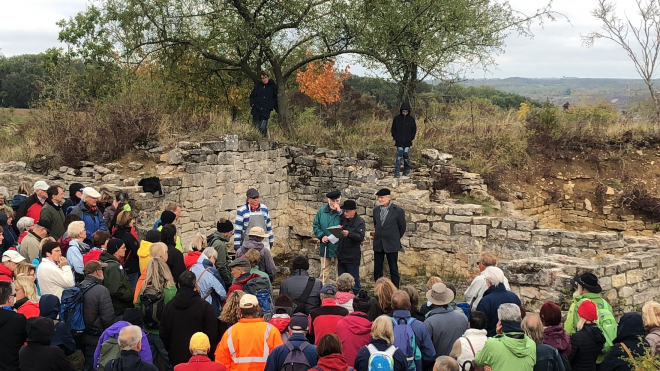 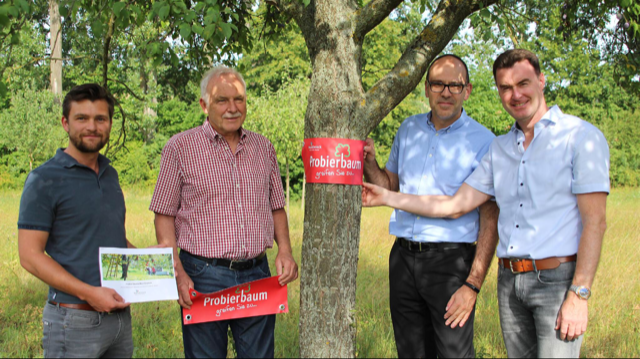 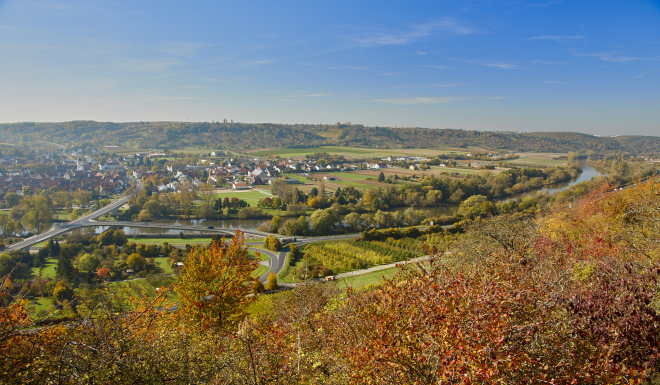 The cultural itinerary starts with stories about the Main. It passes by the town hall square and the Nikolaus church and leads to the cultural landscape station, which tells about wine farming, orcharding and sheep farming. The following station at the former quarry of Winterhausen/Goßmannsdorf deals with stone carvers whose path we follow towards Goßmannsdorf. In Goßmannsdorf we will walk along the creek and reach the Chapel of the Cross. Afterwards, we will cross the Main and climb up Sommerhausen's panoramic trail which leads down to Sommerhausen. The last station there is the city castle.

Follow the sign of the small yellow EU ship on blue background over a length of 14km.

In former times, the old Main landing connected Winterhausen to the rest of the world. As there was no efficient road connection, the river Main was the only possibility to transport goods and people. This however changed only with the railway track from Würzburg to Ansbach being opened in 1864. Between Winterhausen and Sommerhausen, there was a ferry which was first mentioned in a document in 1359. After building the Main Bridge in 1897, the ferry was taken out of service, but was reused after the destruction of the bridge in the Second World War until its service finally ceased in 1970.

In the course of the centuries, no other area of Winterhausen was exposed to such big changes as the old centre including parish church, parish house and school directly located on the Main. Until the middle of the 15th century, Hohenlohe and/or Limpurgian Winterhausen was enclosed by a wall whereas outside on the Main Winterhausen was episcopal with church, parish house and school around the present Mauritiusplatz and abandoned in 1463 due to continuous floods. The next big change was the building of the bridge in 1897: the bridge road became the new transport axis with backfill for the bridge access and customs station. After the bomb attack in 1945, the bridge head was left over as point of view.

The town hall square sloping to the village side offers a beautiful backdrop with a view to the town hall and cantorate watched over by the church tower of the higher located Nikolaus church. By relocating the parish church and school from the Mauritius Square to the town hall the new centre was created. The town hall was built in Baroque style in 1738/39 in the place of the previous building from 1558. Above the main entrance there is an emblem of the Earl of Rechteren-Limpurg-Speckfeld. In 1510, the cantorate was built on Mauritius square as a replacement for the previous school building with two classrooms on the ground floor. In 1463, the parish rights of Mauritius church were transferred to the Nikolaus chapel so that it became a parish church. With the introduction of the reformation in 1542 the church became protestant. On the west side of the three and a half meter high churchyard wall there is a Mount of Olives group from the middle of the 15th century, which is actually typical for Mainfranken and one of the oldest of its kind in this region.

This panel is located on the interface of vineyards, fruit plantations, nutrient-poor grassland and woods. From here, we have got a wonderful view over the Main valley. Up to the 19th century, wine farming played an important role in Winterhausen, was however finally reduced due to grape diseases and phylloxera. In the 19th century, fruit growing was subsidised by the state so that fruit trees were planted along the paths on the former vineyards. The areas above were used as sheep pastures by the people for a long time, but from 1905 on, they were eventually afforested with larches and black pines. Nowadays, a strip is mewed and bushes are removed once a year so that the ecologically valuable nutrient-poor lawn which was originally due to the sheep pastures is maintained. In 2003, the moon path of Winterhausen was installed as panoramic trail in the area of “Würfelleite” and equipped with sculptures to the moon topic made by a group of leisure stone carvers. Hikers will encounter them along the path.

Until the 20th century, the grasslands on Eichenleitberg had been used as pastures before the extraction of shell limestone started. Until the 1930ies, the extraction was made by quarry workers who had a tool shed and a recreation room at their disposal. In 1906, the workers asked for higher wages and went on strike, which was however suppressed by recruited strike breakers. After the 2nd World War, the quarry workers were more and more replaced by machines. A memorial stone by Paul Lorenz Kraus reminds of a Russian forced labourer who was wounded on his escape in April 1945 and found dead in the canteen of the quarry. When the quarry works were given up, a shepherd has kept an eye on the landscape of the Eichenleitberg since 1985. Through the removal of shrubs the area has been maintained within the framework of the Main Shell Limestone Nature Projekt since 2013. More information is available when following the Shell Limestone path.

In the 11th century, Goßmannsdorf was first mentioned in a written document. Through donations, feudal tenure and sales the episcopal property was more and more placed into the hands of strangers so that several noble families with properties could be found there in the late 14th century. The three lords of the village with the biggest property were the Prince-Bishopric of Würzburg, the Barons of Zobel and the Barons of Geyer who jointly issued village rules and engaged a mayor. In 1304, there were some references to a church in Goßmannsdorf. At the same time, the village might have got its own parish in the early 14th century. Viticulture and agriculture characterized the economic as well as social structure of the village for a long time. Trade also played a central role as handling location for the shipment on the river Main. Thanks to the connection to the railway line Würzburg – Ansbach in 1864 Goßmannsdorf achieved new infrastructure capabilities which in particular the stone industry benefitted from.

Kreuzkapelle und Synagoge – Chapel of the Cross and synagogue

Since 1451, the gothic Chapel of the Cross built by the Barons of Zobel in Giebelstadt has been provable. Since 1907 the chapel has been the property of the Church Foundation of Goßmannsdorf. Since the early 16th century, Jewish inhabitants have been provable in Goßmannsdorf. The Baronial lords of the village benefitted from the protection money the Jews had to pay. In 1715, there were 12 Jewish households. In 1765, a synagogue was built. Due to the migration to the cities the number of Jewish people decreased in the 1920ies. In 1942, the last resident Jews were deported and murdered. Presumably in the 14th century, the village was fortified with a wall, ditches, gatehouses and towers. The ring wall was enclosed by a ditch that could be flooded. In the late 19th century, the three gatehouses were destroyed and several breakthroughs in the ring wall were approved.

Sommerhausen’s panoramic trail runs along the border of the up to 280m high Ochsenfurt region which starts on the left side of the Main. On its slopes the wine of Sommerhausen grows on the shell limestone which is covered by a sandy-loam layer. Not only the cultural landscape around the village but also the grapes lit by the sun in the local coat of arms prove that viticulture plays an important role in Sommerhausen. Along the trail the many quarries where shell limestone was and is extracted catch our eyes. At the beginning we will find a Geotope with information board in the Kleinochsenfurt district.

Vineyards were mentioned in Sommerhausen in 1147. From the second half of the 19th century on, viticulture finally decreased due to the small-spatial and therefore only little profitable areas of cultivation. In the 1960ies and 70ies, enormous land consolidations combined vineyard properties and thus formed the basis for successful viticulture.

Sommerhausen castle was built by the family Schenken von Limpurg and is today the property of the Count of Rechteren-Limpurg-Speckfeld. It is a three-part building complex with courtyard and garden enclosed by a wall. The presumably oldest part in the east is the so-called “Yellow Building” with a cellar on the entire length. It was named »Kellerey« in the documents and dates from the middle of the 15th century. At the time it was the biggest private wine cellar of Franconia and is still used in viticulture today. The mighty three-floor building in the west dominates the village of Sommerhausen with its three-storey stepped gable and top pieces and was built from 1569-75 on a possibly much older stock. The octagonal stair tower located in front originates from the same years.